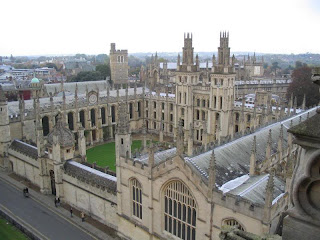 Of the election in University College there is little to say. This was partly, of course, because no one is much interested in what goes on there, so the usual system of espionage has not been developed. The University College is a sort of Oxford Tibet, with primitive inhabitants, strange superstitions, and few economic attractions for colonizing powers. Consequently the election was enveloped in that secrecy which customarily shrouds ( it is said) the election in Lhasa of the Dalai Lama. Quite the opposite, of course, was the election of a warden of All Souls. That should rather be compared with a Presidential Election in America....

You must understand that there is in this university, as in all institutions (see the Bible, passim) a Party of Light (to which the writer belongs) and a Party of Darkness (consisting of those who hold different views). Our party of Light regards a University as a place of Learning and Pleasure, to be controlled by us; their party of Darkness regards it as a place of administrative efficiency and Dullness to be controlled by them. These two parties are nearly always locked in apparently insoluble deadlock; which, however, is ultimately solved by the existence, at a far lower level, of a third party, conveniently described as the Jellies, or party of compromise.

Whereas the Parties of Light and Darkness are distinguished by the enlightenment or blackness of their views, the Jellies or perhaps I should say Jellyfish– are distinguished by their complete absence of any views. They float now this way, now that, as the tide ebbs or flows, sucked helplessly into the wake of ships passing this way now that, sometimes stranded on the beach by the advancing tide, and left to dissolve in the sun, sometimes carried away by the receding tide, quavering, into the strange and terrifying currents of the uncomprehended Ocean.

In spite of their general helplessness the Jellies have, however, two important qualities: first, though sometimes submerged, they never sink; second, though unable to control the direction of their movements, some of them can, if touched, sting. In periods of violent storm ( naturalists observe) these Jellies appear in large numbers around our otherwise placid academic coasts; and the results of their intervention in our elections ( I must now return from metaphor to the world of plain fact) is almost always the same: a compromise candidate is discovered who, in the exhaustion of both parties, is found acceptable by all...he appeals to the Party of Light by being thoroughly inefficient at administration; he appeals to the Party of Darkness by showing no interest in either Learning or Pleasure. Thus, although nobody positively wants him, each party prefers him to the candidate of the other, and he is elected.

Of course the late Warden of All Souls had hardly been buried, and the black hatchment had hardly been hung out, like a somewhat tipsy pub-sign, over the college gate, before the preparations and speculations about the succession had begun. There are in All Souls 51 voting Fellows, and a candidate, to be elected Warden, must obtain at least 26 votes at the formal meeting, but before this formal meeting there are preliminary meetings at which those candidates who are thought to be worth running are selected b a straw vote. Our candidate was, of course, Isaiah Berlin. Theirs was, of course, a professional administrator. At the first straw vote they obtained a majority for their candidate, Sir Edward Bridges, head of the civil service; but Bridges declined the offer, and from this moment the battle can be said to have begun.

The most determined advocate of Darkness in All Souls – A.L. Rowse – happened, at this crucial juncture, to be in California, and ever since airplanes were invented he has loudly declared that his neurosis would never allow him to travel in such a vessel; but when the fate of Darkness in Oxford hung thus precariously in the balance, he at once disinterestedly jettisoned his long and carefully sustained neurosis and appeared with a few days in the surprised cloisters of All Souls. For a week every alcove hummed; then at the next meeting 26 Fellows, with apparent unanimity, supported the proposal of Rowse of a hitherto quite unknown figure: Sir Eric Beckett. Such support, if repeated at the official meeting would infallibly bring Beckett in. The question which everybody naturally asked (including some who had already voted for him) was, Who is Sir Eric Beckett?

Deep research has been devoted to this problem. So far the only clear facts that have emerged are that Sir Eric Beckett is (thanks to an airplane crash which killed his superior) legal adviser to the Foreign Office; that he was once struck in the face by Douglas Jay who, though himself a well-behaved Wykehamist, was outraged beyond endurance by his pro-Franco views, and has twice been in a lunatic asylum.

Conceive, if you can, the crescendo of buzzing in the alcoves, the feverish motion from staircase to staircase in these normally somnolent quadrangles, the sudden attentiveness towards younger voters of hitherto aloof elderly peers, the carefully timed indiscretions and skilfully calculated chance meetings by which, in the next fortnight, each party sought desperately to detach from the other its floating voters; and having conceived it, transport yourself in imagination to the official meeting at which whosoever obtained 26 votes would thereby become Warden of the College.

The first proposal was was made by Rowse who, as sub-warden, controlled the machinery of debate. He proposed Sir Eric Beckett; and thereupon the carefully oiled mechanism of election began those calculated revolutions which could slide the candidate effortlessly into place. Began – but did not complete. Suddenly strange creaks issued from parts of the equipment, as if saboteurs had secretly inserted sand in some essential aperture. The great engine groaned to a standstill, and certain small but important cogs, rods or pistons had not moved – with disastrous consequences: the candidate was not in place. In spite of his earlier absolute majority, he had now only got 23 votes; and 23 were not enough.

At once the Party of Light advanced to try their hand at the machine. Their candidate was in turn placed on the springboard: Isaiah Berlin; and the Party foremen wound enthusiastically with recalcitrant handles. But once again essential springs failed to respond, and the candidate could not be carried forth into the Warden's lodgings. He had only obtained 21 votes, and 21 votes was not enough either.

And now began a famous scene which will long be remembered in Oxford history and quoted in the manuals of our constitutional procedure. Each party in despair began to put up candidate after candidate in the hope of breaking the deadlock, and every advocate of Light, and every advocate of Darkness, in turn submitted to the test in the hope of detaching either three votes in one direction or five votes in the other in order to achieve a majority. Scenes of indescribable confusion followed. Twice did Isaiah withdraw his candidature amid applause from his adversaries; twice he was dragged back by his supporters. Now one hand, now another, grasped the handle of the obstinate machine, but it failed to turn. The issue was always the same. Whoever stood against Isaiah infallibly obtained 23 votes - - the voting strength of embattled Darkness; whoever stood against Beckett as infallibly obtain 21 votes – the voting strength of mobilized Light. There was total deadlock. What was to be done?

At this point the watchers on the academic cliffs began to espy, out at sea, the familiar phenomena of the storm: great shoals of Jellies drifting slowly toward the shore; and within the conclave, by a natural consequence of this news, the cry for a compromise candidate began to be heard. The question was, who could that compromise candidate be? You will have observed that the full toll of voters was 52, but also that the united strength of the two parties amounts only to 44; and whereas we can account for one of the omissions by the fact that the candidate of the moment was always out of the room at the time of the voting, and for a second by the fact that one voter - -Professor Wheare – overcome by the strain of the conclave, had to be carried out on a stretcher, there are still other abstainers to be accounted for. Naturally it was among these abstainers that a compromise candidate would be sought. Who among them was the most appropriate candidate?

Sir Hubert Henderson, Drummond Professor of Political Economy, is a respectable elderly gentleman who is generally known in Oxford for one reason only: in 1949 he made, before the largest Convocation ever remembered at Oxford, the most boring speech that has ever been heard in that assembly. Had there been any votes to lose on that occasion it is universally agreed that Henderson's speech would indubitably have lost them all. ( in fact his speech made no difference at all: everyone came to that meeting with his mind firmly made up that no oratory, however plausible, could have altered it: for we were voting an increase in our own salaries.)

When the first straw vote for the Wardenship of All Souls was taken, Sir Hubert Henderson had only obtained one vote; and it was perhaps this fact (by rendering the whole business academic to him) had caused him to sleep, and thereby abstain, throughout the long struggle of the parties. At all events, when the deadlock within the college walls was complete, and the swish of Jellies in the tide had become audible, the double fact that nobody seemed to want Hubert Henderson and that Sir Hubert Henderson did not seem to want anyone, naturally made him the man of the hour. And thus it was that suddenly, at the crucial moment, when Sir Hubert Henderson was placed in the machine, the handle at last turned effortlessly in its socket; the wheels revolved, the rods and cams, ratchets and pinions all slid with lubricated ease on their intended courses, and the candidate was at last, by 36 votes, carried effortlessly forward into the Warden's Lodgings of All Souls.

It only remains to add that Sir Hubert Henderson, overcome by the excitement of the election, has retired to the hospital with a heart-attack; so a spare hatchment has been commissioned and discrete preparations are already, but I hope wrongly, being made for the resumption of the struggle.

My dear BB, I had meant to touch but briefly on the All Souls election, which concerned your friend Isaiah Berlin, in order thereafter to describe at greater length the even more protracted election - it lasted more than two months – to the Chair of History, which concerned me; but I have already written too much, and perhaps on more personal matters it is more prudent to be brief. Suffice it then that this election ran true to form. For two months there was a total deadlock between those who insisted that they would impose their dead bodies between that candidate and that chair. (The objection is that I write history; and that, they say, should never be done: it is certainly not done by them.) Then, at the usual moment, the Jellies advanced; and the leisure that I had hoped to achieve for study and writing has been awarded instead to a last-minute candidate whose historical studies, confined to one branch of the State Papers during the reign of Elizabeth, have so far yielded, in 25 years, two slender articles. I am sure they are exact and competent articles; but since the author of them touches nothing that he does not desiccate, I cannot find anyone who has read them. However, I must not make any uncivil comment on this election, so I will only say that the standards of Oxford professors of history have been maintained....
Posted by johnshaplin at 5:01 PM