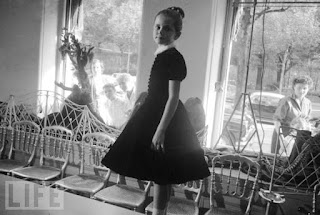 If you mention the name Minou Drouet to your French friends in Paris, not many of them under the age of fifty know whom you’re talking about. But older people know very well, even if they don’t all know the same thing. What do they think they know? She was seven –or was it eight? –years old. She wrote some poems. She didn’t write some poems. In any case, they were a hoax, une supercherie; it was really her mother who wrote them. She was the victim of her publisher, of the press, of her family. She was a talent, but she was a flash in the pan. She had no talent at all – what was it Cocteau said about her, something witty and bitchy? And Roland Barthes, in his Mythologies – didn’t he weigh in, too?

There is a faint sense of embarrassment when people admit that they remember her, as if they’d just as soon forget that their world made all that fuss about nothing, and they moved on to more elevated subjects… in fact, you can’t find a book by Minou Drouet in any bookstore in Paris, not even her phenomenally successful Arbre, Mon Ami, which was published in early 1956.

In his introduction to Arbre, Mon Ami, Rene Julliard explained that it was his friend Professor Pasteur Vallery-Radot “of the Academie Francaise” – the grandson of Louis Pasteur – who had first told him about Minou. Vallery-Radot had heard about her from Lucette Descaves, of the Conservatoire de Paris, who was giving the little girl piano lessons, and who soon entrusted Julliard with a batch of letters she’s received from her pupil. “Never had I lit upon a vein of such richness,” Julliard wrote. “I at once discovered a freshness and liveliness of feeling, a gift for imagery, and a power of expression that were quite exceptional, in short, a poet.” He decided to publish but not in the standard way.

In late September 1955, five hundred copies of a forty-eight-page sampling of Minou’s poems and letters were meted out to “certain critics and amongst my friends.” And at once a storm broke – a dispute that divided the literary and journalistic world into two houses – a sort of minor Dreyfus Affair.” As Time put it in late November – beneath the heading RAGE OF PARIS –“In France, where literature can be a front-page issue, the biggest story of the week – and the year’s liveliest press brawl- raged around the blond head of an eight-year-old princess. Was little Minou Drouet a genius or a fraud?

At the prompting of both suspicious journalists and staunch defenders, Minou was required to write poems before witnesses, one of which she produced while paying a visit, alone, to the Julliards. “Maison Plantee sur le Sable” begins

It’s a cry of longing for a small beach shack that the Drouets rented on the Atlantic coast. She asks if she can write a letter home, and in twenty minutes it’s done” “Mama dear, come get me… I’ve been so unhappy…I slide my arms around your neck, and my little heart is clothed in sadness." Within days this letter is reprinted in France-Soir.

The tormenting of the child never let up. In a letter to Mme. Julliard, Minou wrote, “Our street is vomiting journalists non-stop. They keep on and on with their questions. It feels like the whole world is after me…I wish I were dead. They keep on and on at me with their questions. I think the only words I can utter are fear, pain and death.” As Roland Barthes commented – and, years later, Minou quoted him – “One can prove imposture; never authenticity.”

By the time Arbre, Mon Ami was published, in January 1956, the publicity had been so unrelenting that within a few months the little book had sold forty-thousand copies. The celebrated actress Madeleine Renaud recorded a group of the poems and letters. A jazz band, Michel Attenoux et Son Orchestre, released the “Minou Drouet Stomp” – you can find it in a recent CD collection, Jazz in Paris.

A month after publication, Minou was put to the severest test of all. To resolve the controversy Minou agreed to take a test for membership in the Society of Authors, Composers, and Music Publishers. She was left alone in an office (from which ‘the telephone had been removed to prevent all communication with the outside world’) and given a choice of two topics to write on: “I’m Eight Years Old” or “Paris Sky”. “My eight years were already too sad,” she said. “I chose Paris Sky.” Within twenty-five minutes she had written a few dozen lines, and the judges, as Life put it, “admiringly awarded her membership. ‘I’ve won, yelped Minou.” Life’s translation, in part:

Paris sky
secret weight,
flesh which in hiccoughs
spits into our faces
through the open jaws of rows of houses,
a stream of blood
between its luminous teeth
Paris sky
cocktail of night and fear
which one savors with little licks of the tongue
with little catches of the heart
from the tip of a neon straw.


Soon after the publication of her book, Minou’s life began its transformation from that of a controversial child poet to that of a full-fledged celebrity. She mixes with cabinet ministers at the Julliard’s; she collaborates with famous singer-songwriters like Gilbert Becaud; she’s photographed with Maurice Chevalier (he’s kissing her hand) and at the premiere of Jacques-Yves Cousteau’s The World of Silence (She’s ten, and that big bow is still in her hair.) She demonstrates her guitar playing for Andres Segovia. Pablo Casals teaches her is “Song of the Bird.” In Rome, she encounters Vitorio De Sica, and “quickly we were inseparable – we spent the entire day together.”

She even wins Cocteau over. His famous comment – the one thing everyone remembers about Minou –is quoted in many versions. In her memoirs she recalls it this way: “All nine-year- olds have genius –except Minou Drouet.” But one day at a book signing he came up to her and hugged her. “He was so charming that you couldn’t hold anything against him.”

Most impressive of all, at the age of ten she’s granted a private audience with Pope Pius XII. When she and her mother arrive at the Vatican, her mother warns her to behave herself, but “I forgot all these instructions when a monsignor, dressed in a long violet soutane, came to meet us in and outer chamber. He leaned toward me in a friendly way”:

I answered like a shot:” And I like your robe a lot too. It’s really well cut!”

Maman threw me a look. A nun, standing by, sketched a smile. We followed the monsignor. In the innermost chamber a priest pointed to a massive gold throne and said “His Holiness is going to sit here to receive you.”

I looked at the throne. I raised my eyes. I pointed to Jesus on the Cross that was hanging on the wall.

“His Holiness is going to sit on this throne? And what’s the One up there going to say about that – He’s only got two pieces of wood!”

A burst of laughter from behind me. Pope Pius XII had just come it. “I don’t think anyone’s said anything like that in the entire history of the Vatican,” he remarked.


In her early twenties, Minou published some fables, a novel for children, and a novel for adults, but the irresistible impulse to write had left her when she was fourteen. “When a bird no longer feels the desire to sing, it stays silent.” Her mother contacted Parkinson’s and needed her, her marriage petered out, and in her early thirties she retreated to La Guerche-de-Bretagne, to the house where she had grownup. There she cut herself off completely from her public past, making no appearances and refusing all interviews, until 1993, when, having remarried – her husband, Jean-Paul Le Canu, is a local garageman – she published a reticent and skimpy memoir, Ma Verite (My Truth). But the public was indifferent. Her celebrity, like her talent, had disappeared.

That leaves the poems and letters. The poems are what grabbed attention back in the fifties, and they are still remarkable for their combination of naivete and richness of imagination. A passage like the following is not the typical effusion of a seven- or eight-year-old:

I was the clock face
whose hands bit the fleeting
now,
then silently
moved on to what is
already no more
and from what is already no more
life is born in me.

A child who had been mute and isolated (orphaned and blind), both burdened and blessed with overwhelming feelings that she couldn’t express, is bursting out, giving us the unmediated outpourings of an over-full heart. Is it great poetry? No. But its no supercherie, it’s real.

And in a way Minou is even more remarkable in her letters. Perhaps the most extraordinary are those addressed to her friend Philippe, who’s fifteen and has sworn to marry her when she grows up, and with whom, she has made a pact: They will always think of each other at exactly eight in the evening. This is from the last letter that appears in Arbre, Mon Ami:

My darling, it’s eight o’clock, our eight o’clock. You remember the night when you said to me, in our cedar, “I love you so madly that if you want I’ll go and find you the moon.”…Philippe, at the stroke of eight o’clock I plunged the sliver of crystal you sent me into the sea, at the place where the moon trembles, and I held it out to you, the moon, that living petal in its crystal cage. And I threw back my head and held out my hair to you, my hair in which you loved to bury your face, it was the color of sad water and tasted of salt, and its tendrils were saying to you: You’re loved.

This is Minou Drouet before she’s eight – a primitive, an ecstatic, an original. A few years later, she’s become a phenomena, a scandal, a by-word. “I was a lost child,” she says. “I was only a pathetic little animal, “ she says. “What crime did I commit to be persecuted in this way? She asks. There is no answer. That she survived at all is a testament to her strength. That she lost Minou on her way to becoming Mme. Le Canu is the price she’s willing to pay.

Posted by johnshaplin at 8:34 PM